A native of Sydney, Australia, Kim is an up and coming international Grand Prix dressage rider. In 2015 Kim and her horse, Leonardo, were named to the Australian Equestrian Team High Performance Squad for the Olympics and WEG for 2015- 2020. The pair represented Australia in the CDIO3* Nations Cup in 2015 and 2016. They are Shadow Team members for the 2016 Rio Olympics. Kim has owned and trained Leonardo since he was a just backed 3 year old. Kim became a US citizen in 2007 and still represents Australia in international competitions.

Kim is a USDF Certified Instructor through Fourth Level, a graduate with Distinction from the USDF “L” Program for Judge Training and a CLS 5* rated trainer. Kim has earned her USDF Bronze, Silver and Gold Medals. Kim has a diverse riding background in eventing, show jumping and dressage. She even held an amateur flat and steeplechase racing license. Kim holds a Bachelor degree and an MBA. Her background prior to becoming a professional rider and trainer was in Brand Management and Marketing at an executive level at Kraft, Nabisco and Internatonal Paper. In 2007, she was awarded the Major Andres Lindgren Scholarship from the Dressage Foundation which enabled her to travel to Germany with her horse to train in 2008 and 2009.

Kim and Leonardo, competed in the 2011, 2012 and 2013 USEF/Markel Young National Horse Championships as a 4, 5 and 6 year old each time with top 10 placings. In 2012, Kim and Leonardo won the FEI 5 Year division at the prestigious Dressage at Devon CDI. She repeated this win in 2014 with Frasier who, in addition, also won the overall Young Horse Performance Championship at Devon. In 2013, Kim and Leonardo won the 6 Year old division of USEF Young Horse Eastern Selection Trials for World Young Horse Championships. They were also the highest combined scoring pair in the FEI 6 Year Old classes again at the 2013 Dressage at Devon CDI. Kim has competed at the USDF Finals on horses from Training Level up to Grand Prix. Her clients have also won Championships and top placing at the USDF Regional Championships and Finals the FEI levels.

Kim runs a successful training and teaching business in the Memphis, Tennessee area.

Represent Australia at WEG or the Olympics

"I don't even notice that the helmet's there."

What is your Impression about One K?

The helmets are stunning and are very flattering. I love that they are so stylish with just the right amount of bling or special accent detail! They are super comfortable and are very well ventilated which is wonderful in our hot and humid southern climate. The range of options allows a little bit of fun and the ability to wear a helmet that fits the rider’s personality and color scheme. I love them!

What are your Whacky superstitions or traditions?

I have to wear something blue at show. Nail polish works!!

what is your most Memorable sporting achievement?

Really two things. One was winning the FEI 5 year old class with Leo at the Devon CDI. It was my first big win and I was so emotionally overwhelmed that I had to send my student to the office to pick up my test! I couldn’t sleep that night because I was so excited!! The other achievement was making the Australian Nations Cup Team for the first time in 2015. That’s been a lifelong dream of mine to represent Australia!

Is There Something we might not know about you?

In my youth I performed in the Sydney Opera House. 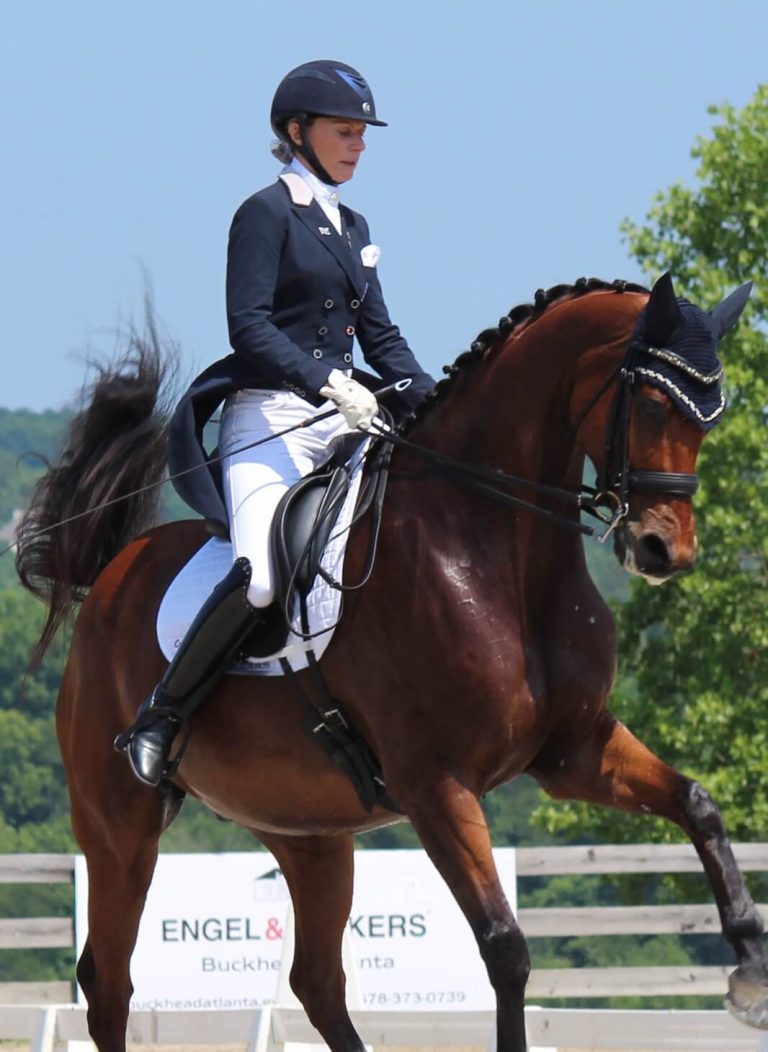